Home/DJI Drones, Drones, News/DJI’s Phantom 4 is the iPhone of drones and so much fun to fly

If we all start flying drones it’ll be DJI’s fault.

The company’s new Phantom 4 drone is not only the best-looking drone of its class, it also puts an incredible degree of flying intelligence in regular people’s hands.

I will be so sad to send this one back.

This is the second DJI quadcopter I’ve tested. The first was the excellent Phantom Standard 3. The Phantom 4 raises the bar on almost every level.

First of all, the body is now more cleanly designed. Much of the technology that appeared exposed on the Standard is now hidden. The camera, for instance, has been fully redesigned. It’s cradled by a new U-shaped gimbal and the SD card slot has moved from the camera to the drone body. In the world of drones, body simplification leads to better aerodynamics and improved maneuverability.

Get ready to fly

The Phantom 4 arrives in what can only be described as the world’s coolest carrying case (okay, some guy on the train did mistake it for an old projector). It holds the drone, charger, remote control, rotor blades and spares.

Setup is actually simpler than it was for the Phantom 3 Standard. The four color-coded blades no longer screw on (in two different directions) on each motor. Instead, you press the blade down and twist in one direction or the other. Easy and fast.

Before flying, you have to charge up both the drone and the remote control. Thankfully, the one included charger comes with plugs for both so you can charge them at the same time.

DJI has a free Go app that you’ll have to install on a smartphone or tablet. I used an iPad mini. The remote control comes with a holder for the tablet. As soon as you power on the drone and launch the app, they connect. You really don’t have to do anything to make it happen.

I had to calibrate the drone each time I flew it by physically rotating it 360 degrees vertically and horizontally, which is a bit easier said than done and, unfortunately, it told me I failed every time. Also, it’s likely that, if you buy one, it will need a firmware update or two. I did a few of them during my trial period.

The DJI Go app automatically shows you the drone’s camera view and is overlaid with a lot of details about the drone, which can be intimidating, but, if you’re not ready to nerd out on flight details, you can ignore a lot of it and focus on the three large icons on the left: Takeoff, Home and Remote and on the right, Record.

Taking off is as easy as hitting the take-off icon. The Phantom 4 will start, rise up and hover patiently about five feet off the ground.

You can control the drone via the remote’s physical controls. The two joysticks give fine control (left for elevation and rotation and right for forward and backward acceleration as well as left and right pitch) and the drone is incredibly responsive. A scroll wheel (called the Gimbal Dial) on the underside of the remote gives you vertical camera control, letting you point straight ahead or tip all the way down 90-degrees to point at the ground below.

I flew the drone in a number of challenging situations including the beach where the Phantom 4 conquered a strong westerly wind. One thing I did notice, though, is that the gimbal did not always manage to keep my video perfectly aligned with the horizon. Not sure if this was the wind or a glitch with the gimbal.

DJI added a pair of black and white depth and object-sensing cameras and a collection of intelligent flying modes that you can access via the app. They are not on by default; you have to choose to enable them. Once you do, though, they’re impressive. It’s worth noting here that you give up a little speed for intelligence. The Phantom 4 can fly at up to 45 miles per hour, but only in Sport mode (one of three flight modes), which disables the intelligent flying features like obstacle avoidance and Tap to Fly. I preferred to leave the smarts on. 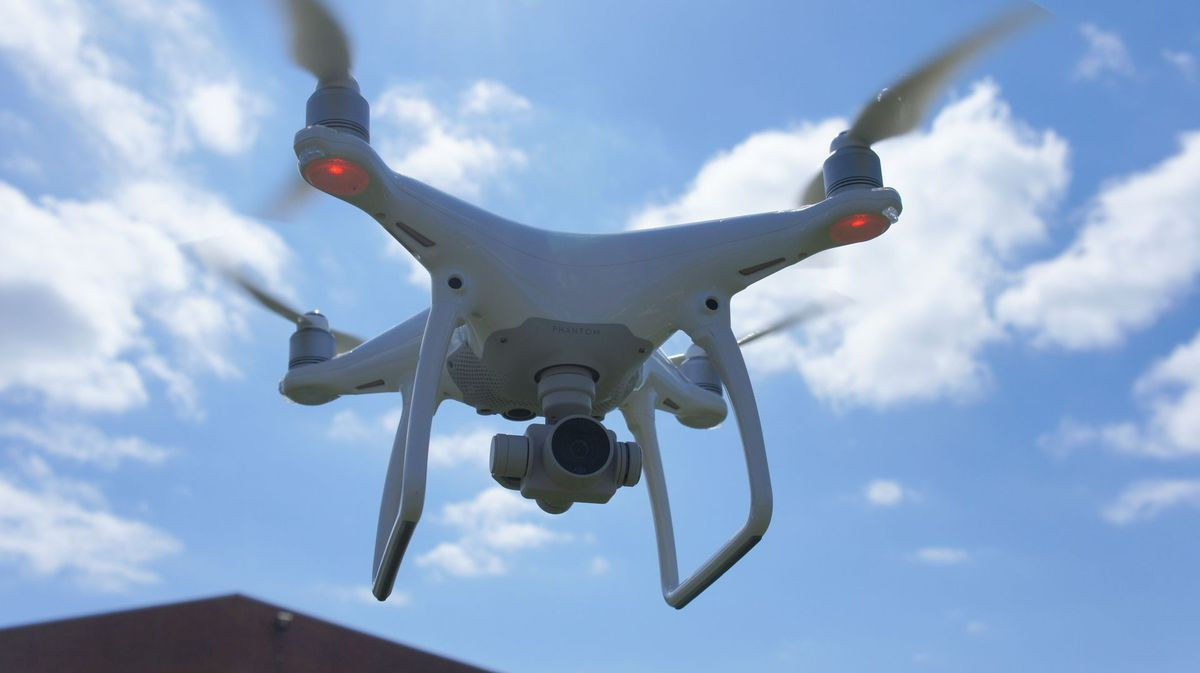 I used Active Track to make the drone follow me as I walked. To enable it, I just had to make sure the main camera was trained on me, marquee myself on the app screen and then hit go. As long as the drone was far enough away from me (a least a couple of meters), it would work to keep me in the center of the frame. Just because I was in intelligent mode, did not mean I could not still fly the drone, but, as long as it was in intelligent flight mode, it worked to keep me as the primary focus. For example, if I sent the drone in one direction, it would basically circle me.

Tracking wasn’t perfect. It needs distance to work, can be a bit slow to catch up and can get confused. In our tests it even ended up following its own shadow. 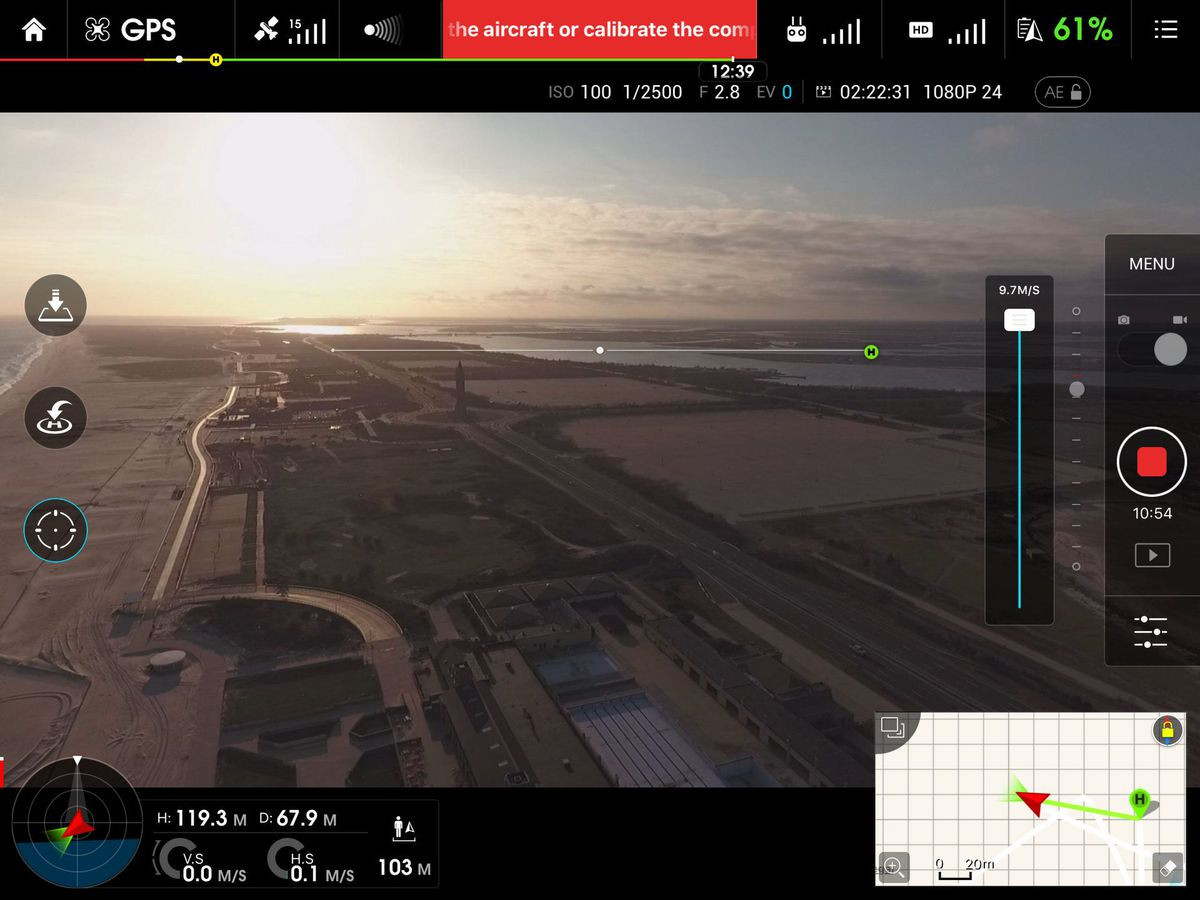 The other mode, Tap to Fly is both powerful and, maybe a bit confusing. Basically, tap the app screen where you want the Phantom 4 to fly and it goes there. If you want to go elsewhere or even go higher or lower during the flight, you just tap the screen.

I found that each time I did this I did not realize how far in the distance I was tapping. The drone would fly off and I would become concerned that it was going too far. Of course, there was always a stop button on screen (there’s also a physical override button on the remote). Also, in the mode, the Phantom 4 would automatically avoid obstacles. If the drone was heading toward a wall, it would stop short. Likewise, for people.

The drone can fly miles away (and can fly at an altitude of up to 19,000 feet, but regulations will limit you to 1,640 feet). I flew in the mode where it would only go as far as the remote control connection allowed (between 300 and 400 feet high). Even so, it could fly so high or so far out that I could literally lose sight of it. When this happened and I could not orient myself and it by looking at its view through the app (and the map overlay in the lower left-hand corner), I would just hit the Home button on the app or on the remote to have it return to where I initially launched the drone.

DJI also increased the size of the battery. In my test flights, I got between 20-and-25 minutes. DJI rates it for 28 minutes, but that number is variable depending on flight conditions.

As I noted above, there’s a microSD card slot in the drone. It’s where you’ll store video. The Phantom 4 camera records up to 4K 30 fps video. Flight data is recorded internally and you have to attach a USB cable to from the drone to a PC to access it.

Not only does the camera do a better job of handling sunlight and switching between bright vistas and darker ones, but the imagery is smooth, spectacular and not distorted. 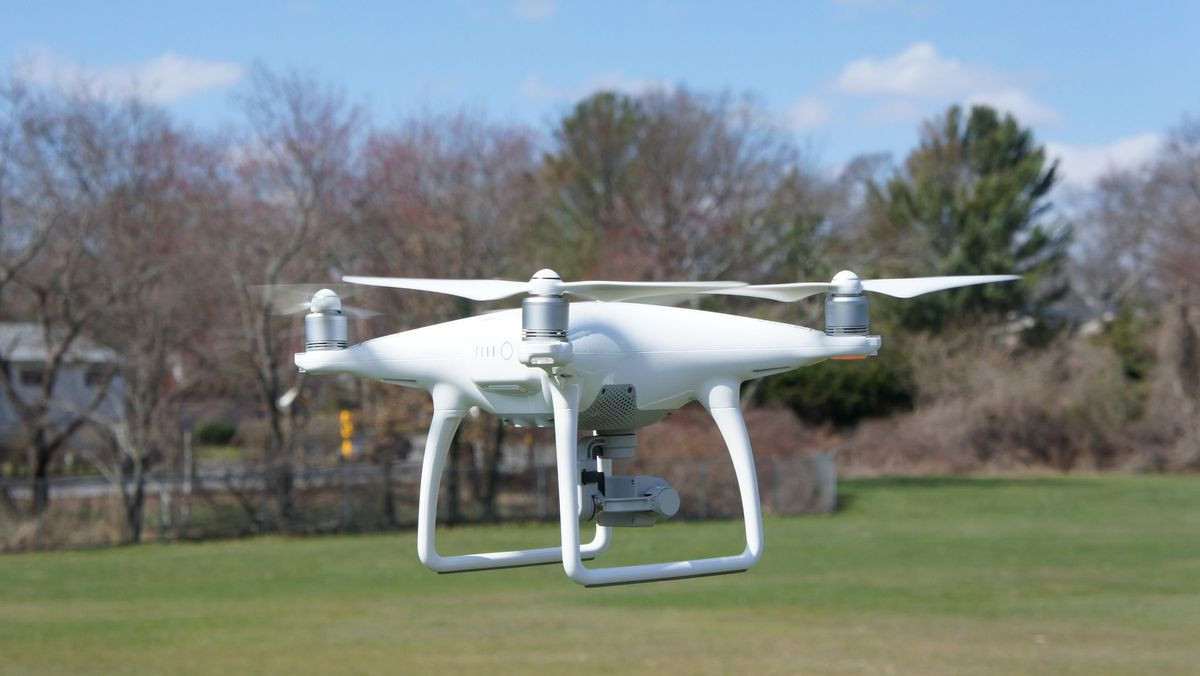 Overall, the DJI Phantom 4 Drone is an excellent device, but before you run out and buy one, there are two things to keep in mind. First of all, this drone is an investment. It costs $1,399. Considering the power and technology, it’s worth it. The other consideration is FAA registration. It only costs $5, but it’s a solid reminder of the responsibility that comes with a personal drone.

This is not to scare you off from flying. I managed to find more than a few places where it was both fun and safe to fly. As long as you can follow the rules, you’ll have fun flying too. 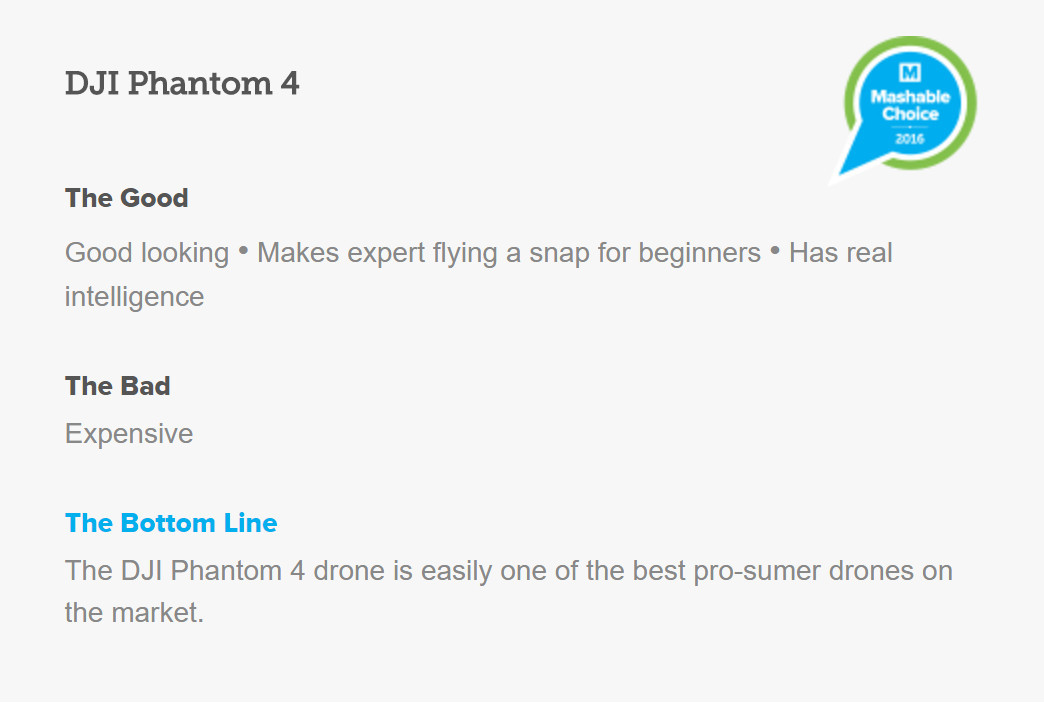 The source of this article written by Lance Ulanoff from mashable.com: https://on.mash.to/2buOibS